The content in this chapter is aimed at advanced learners. That’s why we don’t recommend it for young people under 16.

Learning about what makes a good feature film can help you write better scripts and storyboards.

Even if you’re not really interested in writing a script, it’s still useful and fun to analyse what happens in a film. It means you get to know and understand the film better than if you just watched it once. And it makes you a better film-maker.

In this chapter you’ll learn how to analyse the plot and characters of a feature film. There are many ways of doing this, but we focus on the ‘three-act structure’ theory developed by influential American script-writing expert Syd Field.

Syd Field came up with his theory by analysing many popular films. He found that they basically had the same, three-act structure.

Learning how to analyse a film using Field’s theory will help you see just what it is that makes a good film.

A group of young people analysing a film

You might already know that classical plays tend to have five acts. According to Syd Field feature films have three, but you’ll soon see the similarities between cinema and Shakespeare! 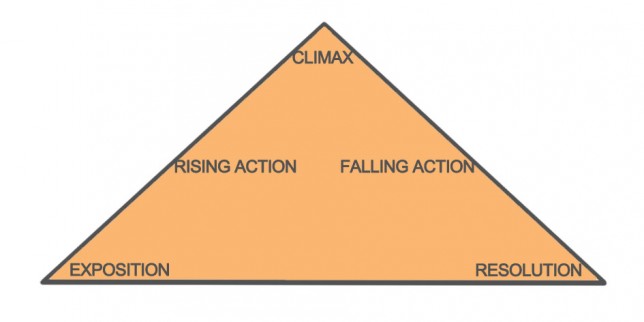 The exposition includes the following elements:

The second act covers the next two quarters of the film. In a two-hour film, the second act lasts about an hour and includes:

The third act is the last quarter of the film. In a two hour movie, the third act would play out over the last 30 minutes.

This act includes the following elements:

maybe we can add a Turkish and a Slovenian movie here]

A classic course structure of four 90min lessons should suit the topic well, but feel free to be flexible. How you organise the course will depend on the length of the film, complexity of the plot, how you conduct the analysis, how many characters you analyse, and how you present the final result.

For example, you might decide to provide the plot and dialogue description for some scenes, to save time. Or you could choose to focus not just on the main character but several others too, for which you’ll need more time.

Elements of the course structure:

To speed this up, the young people could use the subtitle files of the film (either in the original language or translated). These will include all the dialogues in the film, with time codes.

The files can be downloaded from the internet, and have extensions *.sub or *.srt. Never download *.exe files, which can be used to deliver viruses, and remember to scan all the files you do download for viruses.

If you’re using a YouTube video, you may find a transcript under ‘More → Transcription’. Even if this is an automatically generated transcript with some mistakes, you could still us it to create your own transcript of the film.