The camera is one of the most important tools of film-making. Learning to use it well will help you explore your creativity and express yourself as an emerging film-maker.

This chapter gives basic information about different types of camera. You will also learn about framing, camera angles and movements.

If you are interested in the more advanced technical aspects of using your camera, or have a particular interest in camera work, see Camera advanced.

A camera and a tripod are the basic equipment you’ll need to do the exercises in this chapter. Other equipment such as a Steadicam can also help but isn’t necessary.

You can record videos using all sorts of devices. Which one you choose depends on the kind of video you want to make, the equipment you have and your technical knowledge.

Advanced equipment gives you the chance to experiment and be more creative. It also means better-quality video and the option of screening your film on a big cinema screen.

Even if you don’t have a video camera, you shouldn’t hesitate to make films – with your smartphone, an automatic photo camera, or anything else you have to hand. These days you can find film festivals that accept productions made with all kinds of camera. 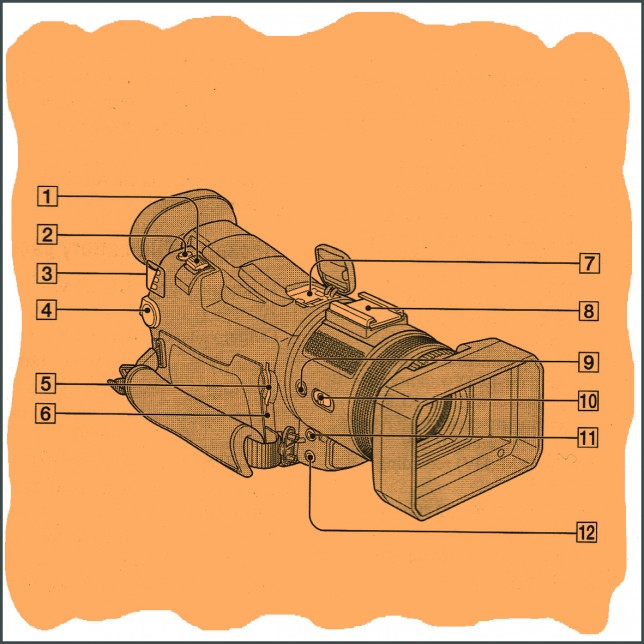 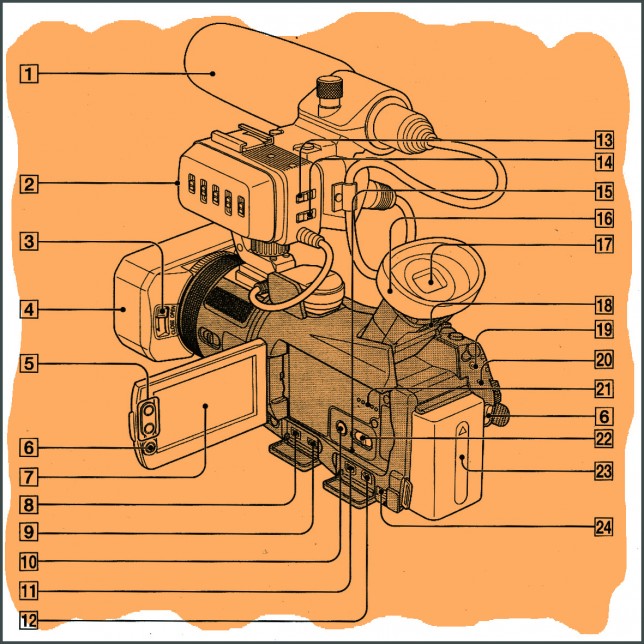 As well as learning about the equipment you need to shoot your film, it’s important to learn the basic ‘language’ of film – how to frame your picture, and how to position and move the camera.

In the early days of film-making, films usually had just one type of framing, one camera angle and no camera movement. They were short and mostly reflected daily situations (for example Workers Leaving the Lumiere Factory 1895, 46 seconds, and The Arrival of the Mail Train 1895, 50 seconds – both by the Lumière brothers). In the years that followed, innovative men and women developed more sophisticated ways of filming to involve audiences emotionally and help them understand complex stories.

The use of different types of framing is a basic method of telling stories in all of their complexity. The aim is to draw the audience’s attention to what we want to show, explain situations and heighten emotion.

Framing can be used in all kinds of video to make them more interesting. Whether you’re filming a friend’s birthday party, shooting a concert, making a music video clip or documenting a project, your film will be richer visually if you use a greater variety of framing.

The exception proves the rule: You could also decide to use a very small number of framing types as a means of expression – for example, to show boredom and stagnation.

Most of us are able to use appropriate framing instinctively, but it helps to know how framing is used by the professionals. Using the correct terminology is also important when you prepare a filming plan and discuss the picture with other people in the project.

Different film schools use different terms for types of framing. The terms below have been specially chosen for this guide. We feel they are more user-friendly and intuitive than some of the terminology you might see elsewhere.

Whatever the naming convention, the important thing is to be able to recognise the different framing types, understand what they do, and learn how best to combine them.

Total: the whole human figure is in the shot.

There are three sub-groups:

Total framing types tell us WHERE something is happening.

American: from the knees to the top of the head; developed for Western movies, so the audience could see the cowboy pulling the gun from the holster on his hip.

Waist: from the waist to the top of the head; often used when filming politicians giving speeches.

American and waist shots tell us WHO the key figures are.

Chest: from the chest to the top of the head; often used for dialogue scenes.

Portrait: from the shoulders to the top of the head; similar to chest shot and also often used for dialogue scenes, but more intimate.

Close-up: from chin to forehead; used to show subtle or extreme emotion, for example a single teardrop or an angry facial expression.

Detail: draws our attention to a specific detail, for example an important object, action or a body part like the eyes.

Narrow shots tell us WHAT is happening.

Video: Use of different framing (LIJAmedia)

The camera is the ‘eyes’ – or point of view – of the audience or the characters in a scene. By placing the camera at different angles, you can make the main subject appear dominant, weak, lost, confident, big or small to the audience and other characters.

Neutral angle: the camera is at the same height as the subject – for example, level with a person’s face. This position doesn’t make them look either inferior or superior.

The neutral camera angle is normally used when filming interviews, TV news programmes or documentary films. In feature films the neutral angle is used to film conversations between people who are of the same height or standing/sitting on the same level. This shows they have equal status.

Low angle: the camera is slightly lower than the subject’s eye level. They appear stronger, more powerful or more important.

Extreme low angle: the camera is placed much lower than the subject’s eye level, for example on the floor. They appear very big and frightening.

High angle: the camera is slightly higher than the subject’s eye level. They appear weaker and smaller.

Extreme high angle: the camera is high above the subject’s eye level. They appear very small, insignificant and lost.

In feature films you can use a combination of camera angles – for example a high and a low angle – to show how people of different height see each other. The same goes for filming people who aren’t standing/sitting on the same level, or where you want to show that their status is not equal – for example child and parent, boss and employee.

Video: Example for the use of different camera angles (a short film by Frederic Klamt – WTV user)

Panning and tilting are two of the most common camera movements. You will usually need a good tripod, to make sure the movement is smooth.

In a pan you move the camera horizontally from left to right or right to left.

In a tilt you move the camera vertically up or down.

When are panning and tilting used?

Pans and tilts are usually done with a zoom-out, or wide angle. The speed of the pan/tilt should be constant throughout. You don’t usually make any other movements while you pan or tilt. It’s important to define the composition of the start and end pictures in advance.

Although they appear very similar to the eye, there is a difference between ‘zooming’ and ‘following’.

When you zoom, you keep the camera in one position. You get closer to the subject by zooming in and move away by zooming out. While you zoom, you change the focal length and the depth of focus (read more in Camera advanced).

When you follow, you move with your subject – behind, in front or alongside them – keeping the same distance. You keep the same focal length and depth of focus because you’re moving the camera rather than zooming.

Examples of following from a car

Or you might want to make a related camera movement: bringing the camera closer to (or away from) a subject the isn’t moving. As with following, keep the same focal length and depth of focus.

Both zooming and following allow you to show a moving subject from detail to total (and vice versa) in a single shot. They can also be used for special effects.

Comparable to tilting and panning for zooming applies as well: When you press the record button, hold the first picture (start position) for at least 3–5 seconds before you start zooming.
When you stop zooming, hold the last picture (end position) for another 3–5 seconds before you stop recording. This will give you more editing options.
You will need a tripod for a smooth zoom.
Zooming is more often used in TV productions – including news and TV shows – than in films.

Following by moving with the subject requires much more space for the movement of the camera operator.

Following appears more natural to us – we can’t physically zoom with our eyes. That’s why in films it’s used more often than zooming.

Dollies and tracks are often used for following in big productions. In low-budget productions you can improvise with skates, bicycles, cars, home-made trolleys, etc. Fix the tripod or camera to your vehicle, or film with a hand-held camera.

Shooting with a hand-held camera creates a documentary effect in feature films; it makes us feel as if we are taking part in the action. The camera constantly moves slightly, and the composition is not always perfect.

Hand-held cameras are often used in documentary film productions. Bigger cameras can be carried on the shoulder as well.

A steadicam is a device to stabilise the camera. Camera stabilisers help you shoot a smooth picture even when you’re moving with the camera (for example running or walking on uneven ground).

The design of the device reduces the jolts and shakes that are usually visible on a picture made with a hand-held camera. Steadicams are widely used by professional film-makers.

Most consumer cameras have a built-in adjustment mechanism to compensate for shaking. You can turn this function on from the menu, but bear in mind that it doesn’t have the same effect as a professional camera stabiliser.

Cranes are mostly used on film sets or for big shows on TV like Eurovision. For low-budget productions you can rent a smaller.

Drones can lift the camera very high above the ground. They are a cheaper alternative to a real helicopter or airplane, and can help you get shots of places that are not easily accessible on foot or for the production of promotional and travel videos.

There are many more ways to create camera movement, but these are the main ones.

For low-budget productions, you can look online for other tools that help you create movement – for example Fig Rigs. There are also ‘do it yourselves’ tutorials for building your own equipment.

Feel free to research and experiment, and use whatever helps you get the effect you want.

The framing isn’t defined well (for example a person’s forehead is cut off), a shot is at an angle, or there is too much space above the head / below the feet of the subject (see Composition and color).

The height of the camera suits the camera operator and not the subject! Placing the camera at your own eye level is natural, but sometimes you have to crouch or climb higher to get a good shot.

These common mistakes may appear very obvious, but we tend to forget about them in the heat of the moment.

It’s a good idea to come back to this section when you’ve finished the exercises, or when you start to shoot a film. Check what shots you’ve made and see if you can find any of the above mistakes. We all learn best from the practical work we do and by recognising the mistakes we’ve made.

The exercises in this chapter are designed to help you get started with camera work, and so they’re really important. However, they can be a bit boring if you don’t have a project in mind.

Whether you’re learning by yourself or leading a group of young people through the process, pick a topic that interests you and link the exercises to the topic. Your motivation will be stronger, you’ll enjoy editing the clips more, and the final result will be better.

Topics can include friendship, your town / village, time of the year, school, youth club, family members.